END_OF_DOCUMENT_TOKEN_TO_BE_REPLACED

A long but satisfying ending to a highly enjoyable series. 4/5 stars. 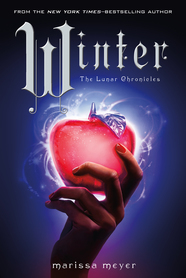 What it’s about: to avoid spoilers I’ll say that Winter is the fourth and final full-length installment of The Lunar Chronicles, a YA fantasy series involving fairytale retellings. For more background, check out my reviews of books 1-3: Cinder, Scarlet and Cress.

This review will be short to avoid spoilers.

Meyer’s writing is as easy-to-read and enjoyable as ever. All the established characters continue to behave and develop as we would expect. The ending is a delight. Particularly because Meyer has remembered that the majority of her characters are under twenty one and so gives them age-appropriate happy ever afters.

It’s not a spoiler to say that my favourite character (other than Cinder) is “Captain” Thorne. He’s marvellous and I’d happily read a spin-off series about his adventures. For fellow Thorne fans, I’ll just say: Chapter 95, people. Chapter 95 🙂

The only downside to this book is it’s length and I’m torn even about that. On the one hand, at nearly 900 pages, Winter could easily have been two books. This would have given readers a break. However, it would also have given us more cliffhangers and waiting… Besides, I have to give Meyer credit for writing such a cohesive final book over such length. Plus, although it can become a bit of a slog in places, I understand why the author would want to take time to revel in her characters one last time. And, if you’re going to write a revolution, it can’t occur overnight if it’s going to be believable and entertaining. Nothing would be more dull than our heroes strolling up to the moon, knocking on the door and nasty Queen Levana handing them the keys to the kingdom.

Overall: fans of the series will be delighted. Winter may bring this highly entertaining series to an end, but at least Meyer gave us lots to enjoy in this lengthy final installment.