The less-discussed side of Greek myth. 4/5. 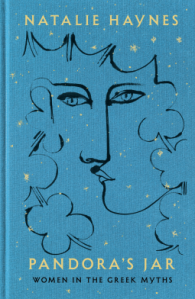 Thank you to Picador/Pan Macmillan for providing me with an e-copy of this book via NetGalley.

The Greek myths are among the world’s most important cultural building blocks and they have been retold many times, but rarely do they focus on the remarkable women at the heart of these ancient stories.

Stories of gods and monsters are the mainstay of epic poetry and Greek tragedy, from Homer to Aeschylus, Sophocles and Euripides, from the Trojan War to Jason and the Argonauts. And still, today, a wealth of novels, plays and films draw their inspiration from stories first told almost three thousand years ago. But modern tellers of Greek myth have usually been men, and have routinely shown little interest in telling women’s stories. And when they do, those women are often painted as monstrous, vengeful or just plain evil. But Pandora – the first woman, who according to legend unloosed chaos upon the world – was not a villain, and even Medea and Phaedra have more nuanced stories than generations of retellings might indicate.

Now, in Pandora’s Jar: Women in the Greek Myths, Natalie Haynes – broadcaster, writer and passionate classicist – redresses this imbalance. Taking Pandora and her jar (the box came later) as the starting point, she puts the women of the Greek myths on equal footing with the menfolk. After millennia of stories telling of gods and men, be they Zeus or Agamemnon, Paris or Odysseus, Oedipus or Jason, the voices that sing from these pages are those of Hera, Athena and Artemis, and of Clytemnestra, Jocasta, Eurydice and Penelope.

Earlier this year I enjoyed and reviewed Natalie Hayne’s A Thousand Ships (she’s had a busy year!), her excellent retelling of events relating to the Trojan War from the point of view of the female characters. However, while that was a work of fiction, Pandora’s Jar is non-fiction and a more academic consideration of the women of Greek myth.

This is an entertaining look at 10 female mythical figures as Haynes continues to her work to make the classics accessible. She was a stand-up comedian for many years and her wit shines through in her writing, helping to make what could be quite dry subject matter amusing and relatable. The volume of research she’s done is also commendable, particularly when the primary material about women in Greek myth is often scant, especially when compared to what we know about the men from ancient sources.

END_OF_DOCUMENT_TOKEN_TO_BE_REPLACED

We don’t need another hero.

Thank you to Picador/Pan Macmillan for providing me with an e-copy of this book via NetGalley.

Shortlisted for the Women’s Prize for Fiction 2020

In A Thousand Ships, broadcaster and classicist Natalie Haynes retells the story of the Trojan War from an all-female perspective, for fans of Madeline Miller and Pat Barker.

In the middle of the night, Creusa wakes to find her beloved Troy engulfed in flames. Ten seemingly endless years of brutal conflict between the Greeks and the Trojans are over, and the Greeks are victorious.

The devastating consequences of the Trojan War stretch from Mount Olympus to Mount Ida, from the citadel of Troy to the distant Greek islands, and across oceans and sky in between. These are the stories of the women embroiled in that legendary war and its terrible aftermath, as well as the feud and the fatal decisions that started it all. . .

Powerfully told from an all-female perspective, in A Thousand Ships Natalie Haynes gives voices to the women, girls and goddesses who, for so long, have been silent.

It’s interesting that the blurb mentions Madeline Miller and Pat Barker. I’ve read The Song of Achilles and Circe (both by Miller) and The Silence of the Girls by Barker. I enjoyed A Thousand Ships more than the Barker but didn’t love it as much as either of Miller’s books.

Barker’s The Silence of the Girls disappointed me because I’d hoped it would retell events from The Iliad from the perspective of the female characters. But halfway through the narrative we switch from the female characters’ viewpoints to Achilles’, and I didn’t think we needed yet another male view on events. Thankfully, Haynes doesn’t do this in A Thousand Ships. Instead, we get an entirely female perspective as we skip between the stories of various characters featured in The Iliad (and, to a lesser extent, The Odyssey), including goddesses.