A terrific conclusion to a stellar series. 5/5 stars.

The blurb: No blurb for book 3 here because I don’t want to spoil the first two books! If you want to know more about what’s gone before, check out my review for book 1 – A Darker Shade of Magic (5 stars) – and book 2: A Gathering of Shadows (4.5 stars).

This review will be spoiler-free. Please forgive the disjointed and brief nature of what follows: turns out reviewing the final installment of a trilogy while giving absolutely nothing away is rather tricky!

Every time I took an unwilling break from reading A Conjuring of Light I had to blink and re-orientate myself in reality, like a swimmer surfacing. This has been a hallmark of the quality of this series: Schwab draws the reader into the pages and spins words into worlds around them until they are completely immersed in her fiction. This is no mean feat and to pull it off so consistently is beyond impressive.

END_OF_DOCUMENT_TOKEN_TO_BE_REPLACED

The blurb: Four months have passed since the shadow stone fell into Kell’s possession. Four months since his path crossed with Delilah Bard. Four months since Rhy was wounded and the Dane twins fell, and the stone was cast with Holland’s dying body through the rift, and into Black London.

In many ways, things have almost returned to normal, though Rhy is more sober, and Kell is now plagued by his guilt. Restless, and having given up smuggling, Kell is visited by dreams of ominous magical events, waking only to think of Lila, who disappeared from the docks like she always meant to do. As Red London finalizes preparations for the Element Games—an extravagant international competition of magic, meant to entertain and keep healthy the ties between neighboring countries—a certain pirate ship draws closer, carrying old friends back into port.

But while Red London is caught up in the pageantry and thrills of the Games, another London is coming back to life, and those who were thought to be forever gone have returned. After all, a shadow that was gone in the night reappears in the morning, and so it seems Black London has risen again—meaning that another London must fall.

This review will be spoiler-free. However, if you want to know absolutely nothing then just know this: if you enjoyed book 1 – A Darker Shade of Magic – then you will enjoy A Gathering of Shadows.

And if you enjoy fantasy fiction and haven’t read A Darker Shade of Magic yet, what are you waiting for?! Here’s my 5* review.

That said, on to the review of A Gathering of Shadows…

END_OF_DOCUMENT_TOKEN_TO_BE_REPLACED

I reviewed 70 books on this blog this year. Only five of them got 5 stars. I don’t feel able to say any of them is “better” than the others. However, I will rank them according to how wide an audience I think would enjoy them (my total guess here… other opinions are available!).

So here we go. Counting down…

END_OF_DOCUMENT_TOKEN_TO_BE_REPLACED

A skillfully-handled, complex plot and a cast of equally complex characters make Vicious another 5-star book from V. E. Schwab. 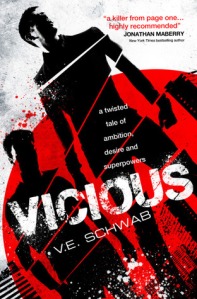 I came to this book without knowing anything about the characters or plot and I believe that improved my experience. In my opinion, the official blurb gives far too much away and would make some of the earlier chapters less interesting. However, if you do want some background, you can read the blurb at the bottom of this review. Otherwise, just trust me: this is great.

END_OF_DOCUMENT_TOKEN_TO_BE_REPLACED

Fantastic, in every sense of the word.

Fantasy fiction fans will love this book. I can’t fault it: 5/5 stars.

Where to begin? Perhaps with the idea. The idea behind this book is intriguing and elegant. Schwab describes her three Londons (well, there are four, but we don’t see one of them), each in their own sealed pocket of reality, with an admirably confident and consistent logic which carries the reader between them smoothly, letting the characters take the knocks.