Next, draw on the eyes, mouth and arms. I used an edible decorating pen, which made the job very easy. However, you could pipe on melted chocolate using a very fine piping tip. If you have steady hands and the skill for this, I take my hat off to you.

Now stick on the mini Smartie nose and buttons. You can do this with a little icing. I happened to have writing icing in a tube, so it was almost like using edible glue to put a small blob of icing on the back of each Smartie and then press them onto the marshmallow. You could also make up some icing by mixing icing sugar and water together and use this to fix the Smarties on.

The snowmen can be persuaded to stand up if you stick the end of the skewer into another marshmallow: 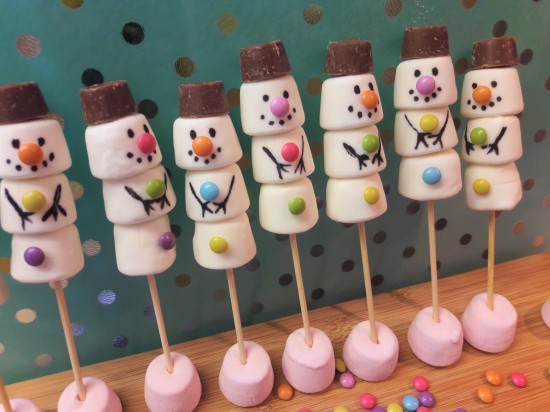 Like the marshmallow penguins I made a previous Christmas, the best thing about the snowmen is that they all seem to have their own personality! The one here below with an orange nose looks like a cheerful chap having a good gossip with his friend next to him: 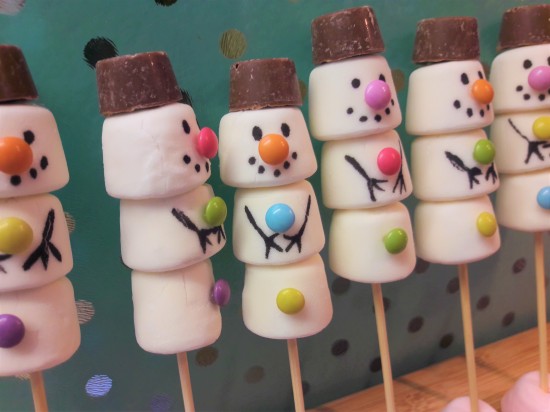 These festive marshmallow snowmen will keep for weeks in an airtight container, just make sure you keep them away from heat so their hats don’t start to melt.

Just be careful when giving them to little people to eat to prevent any accidents with the end of the skewer. 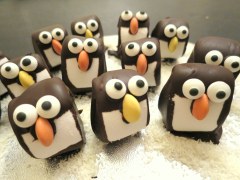