Highly atmospheric and fiendishly clever, but missing something for me. 4/5 stars. 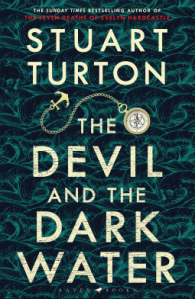 Thank you to Bloomsbury Publishing for providing me with an e-copy of this book via NetGalley.

It’s 1634 and Samuel Pipps, the world’s greatest detective, is being transported from the Dutch East Indies to Amsterdam, where he is facing trial and execution for a crime he may, or may not, have committed. Travelling with him is his loyal bodyguard, Arent Hayes, who is determined to prove his friend innocent, while also on board are Sara Wessel, a noble woman with a secret, and her husband, the governor general of Batavia.

But no sooner is their ship out to sea than devilry begins to blight the voyage. A strange symbol appears on the sail. A dead leper stalks the decks. Livestock are slaughtered in the night.

Could a demon be responsible for their misfortunes?

With Pipps imprisoned, only Arent and Sara can solve a mystery that stretches back into their past and now threatens to sink the ship, killing everybody on board…

I was incredibly impressed by Turton’s debut novel, The Seven Deaths of Evelyn Hardcastle, if for nothing more than the sheer amount of work that must have gone into keeping all the plot lines straight. So I was really looking forward to his new book and I’m sorry to say I didn’t find it quite as successful as Seven Deaths. That’s not to say I didn’t enjoy it at all, I just didn’t find it as pleasing. I’ve given both books 4 stars, but I think Seven Deaths was more 4.5 rounded down and The Devil and the Deep Water is more 3.5 rounded up (I’m aware this is a bit odd and possibly unfair, but I can’t review with hindsight!).

There is loads of great stuff to like in The Devil and the Deep Water. What I enjoyed most was the brilliant atmosphere. The ship is a great claustrophobic setting for mysterious shennanigans and felt really creepy and threatening at times.

I also liked the female characters who didn’t sit on their backsides and wait for anyone to save them. I’m not quite sure how historically accurate women having this much agency in the early 17th century – particularly onboard a ship – would have been, but I was happy to suspend my disbelief.

Also, hats off to the author for creating a partnership of investigators who are basically Holmes and Watson and then shoving his Holmes out of the way for most of the book to let his Watson have the run of the place. I thought this was an audacious move and one that paid off.

Perhaps my enjoyment was slightly marred from the off. I found it difficult to get into the story initially because the book has such a large and varied cast it took me a while to get a firm grip on who the heck everyone was. I found myself going back a few pages to check I’d got it all straight, which took me out of the story and interrupted the narrative flow.

Also, I felt a little let down by the ending. After roughly 500 pages of complicated malarkey on the high seas, supposedly supernatural or otherwise, I was expecting a rather spectacular denouement. But when we finally got the big reveal, it seemed sadly rushed and emotionally flat.

Overall: a fiendishly complex mystery with a highly atmospheric setting, but perhaps the dazzling intricacy of the set up takes the narrative to such heights that the reveal can only be anticlimactic.