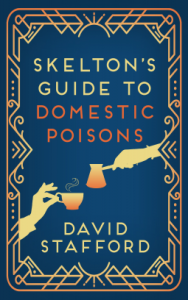 Thank you to Allison & Busby for providing me with an e-copy of this book via NetGalley.

Unassuming Yorkshireman, Arthur Skelton, is one of the most celebrated and recognisable barristers in the land. His success in the high-profile Dryden case – ‘the scandal of 1929’ – catapulted him to the front pages of the national newspapers. His services are now much in demand and, after careful consideration, he agrees to defend Mary Dutton.

Dubbed ‘The Collingford Poisoner’ by the press, Mary is accused of poisoning her husband after years of abuse. Together with his trusted assistant, Skelton digs deeper and discovers that secrets and lies run deep in the Dutton family and all is not as it appears.

I enjoyed this story, especially its varied and colourful range of characters, the often witty dialogue, and the way it dealt with the intricacies of the intersection of law and politics. I also liked that it wasn’t entirely London-based and the period details were terrific, you can tell there’s a lot of careful research behind the writing.

However, from the first couple of chapters I thought I was in for a thrilling investigative mystery, but that isn’t really what the book turns out to be. While Skelton’s detective work does take us down a few dead ends and yields some revelations, I felt that the book becomes more a character study than murder mystery.

In fact, I really hope this book is the first in a series. If not, then there is a lot of unnecessary character exposition in the story which could have been cut in the interests of advancing the plot. The oodles of character insight also muffle the stakes, diluting the tension which should have been the heart of the narrative.

Also, while details are great, we are told a lot of information which turns out not to be relevant to the plot. I kept thinking, “Oh, that will surely be significant later or help Skelton to solve the problem,” but then it wasn’t! So, again, I hope the groundwork laid in this book is paving the way for future installments where all the character building will pay terrific dividends.

Overall: an interesting story with great period details, but not as exciting as I’d hoped with the central mystery muffled by extensive character insights.