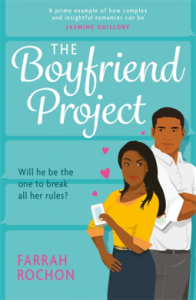 Thank you to Headline for providing me with an e-copy of this book via NetGalley.

Samiah Brooks never thought she would be ‘that’ girl. But a live tweet of a horrific date reveals the painful truth: she’s been catfished by her three-timing jerk of a boyfriend.

Suddenly Samiah – along with the two other ‘girlfriends’, London and Taylor – have gone viral. Now the three new besties are making a six-month pact: no men, no dating, just time to focus on themselves.

But is Daniel really boyfriend material – or is he simply too good to be true?

I must say first off that 3 stars is a good rating from me! I know some reviewers and authors see it as negative, but I enjoyed this book and would recommend it to fans of the genre.

Now that’s out of the way, The Boyfriend Project is a fun contemporary romance that has a lot going for it. I loved the opening which is described in the blurb above. I was particularly delighted that when the three women find they’ve been dating the same man they join forces and turn on him, rather than turning on each other. And then that they go on to become great friends and a mini support network for each other is wonderful.

Samiah – the main female character – is terrific. She’s strong, independent, incredible hard-working and fiercely intelligent. It’s also nice to see a story from the point of view of a young, successful black woman working in the super-competitive and male-dominated tech industry. The many barriers she has faced (and continues to face) as a black woman (and girl at school before that) accessing a STEM field are addressed and are an important part of the story.

Some tension is maintained throughout the narrative through the dramatic irony surrounding Daniel’s big secret. We know that eventually the truth will out and the wait is like watching the countdown clock on a bomb which will go off in the middle of his and Samiah’s relationship.

I thought the regular switching between Samiah and Daniel’s viewpoints worked well and was clear.

But here come the buts… I prefer romances where the relationship between the characters develops slowly over the course of the story as they have to overcome various internal and external barriers to being together. Here the characters’ attraction to each other is so instantaneous, it’s a little close to insta-love, which I felt killed off some possibility for tension or development later in the book.

Also, and this will sound nitpicky, but while Daniel was great, perhaps he was a little too great? I’m all for desireable love interests, but I would have liked to see a couple of flaws, even minor ones!

Overall: if you’re looking for a good office romance story, give The Boyfriend Project a try!

7 thoughts on “Review | The Boyfriend Project by Farrah Rochon”