A captivating blend of the everyday and extraordinary 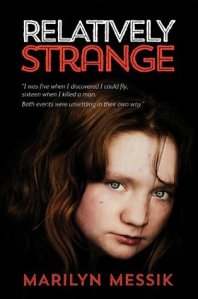 Thank you to the author for providing me with an e-copy of her book.

“I was five when I discovered I could fly, sixteen when I killed a man. Both events were unsettling in their own way.”

It’s hard to know what’s normal, if you’re not, and it takes Stella a while to realise she’s in the definitely ‘not’ drawer. But we are who we are and we make adjustments to fit in – most of the time – and it’s only when she finds she’s not quite as unique as she thought, that things begin to acquire a whole new dimension.

Forced to call on resources she didn’t know she possessed and thrust headlong into the violence of a situation for which nothing could have prepared her, Stella is suddenly face to face with the stark reality of medical experimentation and its horrifying consequences.

But in a world of uncertainties, one thing’s beyond doubt – this hero stuff really isn’t her. Normal, or as near as damn it, is what she wants and if that means smothering her instincts and adjusting her expectations well, so be it. At least she’ll then know should she slip off the wagon occasionally, it’ll be through choice, not chance and to suit herself. Isn’t it a fact though that just when you think you’ve got yourself sorted, life turns round and bites you?

I’m not sure I’ve ever come across such a perfect book title! And that’s possibly because I haven’t read anything quite like Relatively Strange before. I struggle to describe it, but I think the best I can do is to use a Marvel analogy (and I appreciate I may lose those of you who have no interest in superhero comics or movies, sorry!). Imagine an X-Men character with all their amazing powers, born into a “normal” London-based family in the 1950s, wrote an amusing, highly-personal memoir covering episodes from the first twenty-something years of their life. That’s close to what you get in this book, although it still doesn’t do it justice!

As you might imagine, the discovery and fledgling use of her powers in Stella’s childhood means she has many amusing and original anecdotes (casually flying off the ground at a large family gathering, for example) which are imparted in a convincing voice which is calm and amused, the tone of someone looking back on an eventful life with the benefit of maturity.

However, while these more comical anecdotes bring levity in the narrative, there are also several more dramatic, serious interludes as Stella is recruited for duties more befitting an X-Man. I don’t want to spoil the plot, so safe to say that her powers also come in useful to fight dark forces, resulting in some gripping, suspenseful episodes.

It’s this combination of the familiar (in both its senses, as many of the funnier moments come from events which have occurred with members of Stella’s vividly-described, wonderful extended family) and the extraordinary, which makes Relatively Strange so varied and readable, with the differences in tone and shade held together by the consistency and clarity of Stella’s first-person voice.

I’m very pleased this is part of a trilogy, as I felt Stella was just getting started on her journey as the book came to a close. I look forward to reading about what she gets up to next.

Overall: if you’re looking for something completely different, a unique combination of extraordinary drama and comic mundanity, the supernatural and banal, I urge you to give Relatively Strange a try.

Get your own copy!