A deftly-handled tale about stories and storytellers. 4/5 stars. 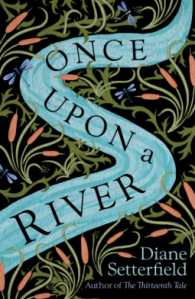 Thank you to Random House UK and NetGalley for providing me with an e-copy of this book.

The blurb: A dark midwinter’s night in an ancient inn on the Thames. The regulars are entertaining themselves by telling stories when the door bursts open on an injured stranger. In his arms is the drowned corpse of a little child.

Hours later the dead girl stirs, takes a breath and returns to life.

Is it a miracle? Is it magic? Or can it be explained by science?

As the title gives away, Once Upon a River is a story about stories. I think the main reason it’s so successful as a good yarn is the effort that has gone into creating atmosphere. The author is particularly successful in conjouring up the damp, sometimes murky conditions of the riverside, which makes an evocative setting for scurrilous and possibly supernatural events. The use of the third person narrator also works very well as it’s in keeping with an oral narrative tradition which includes fairytales and myths.

The various threads of the story are woven together neatly, but kept clearly delineated through the use of a memorable set of core characters.

So we have the sceptics: Daunt and Rita provide a nice “scientific” counterpoint to the apparently supernatural goingson surrounding the arrival of the mysterious child, tethering the story in reality and preventing it from wandering off into fantasy.

Meanwhile, the Vaughans are a sympathetic couple torn between the hardness of reality and the comfort of fantasy, and when we finally get to the truth of what happened to their daughter it’s one of the most moving passages in the book.

And finally, the villains are properly nasty pieces of work. The chief scoundrel is almost Dickensian (and, in fact, elements of the story reminded me of Dickens a few times), although none of the characters in Once Upon a River reaches the level of caricature which Dickens often favoured.

Personally, I liked the conclusion which refuses to go too far in pronouncing on exactly what has been happening and leaves it up to the reader to make up their own minds as to whether they prefer a mystical or fully scientific explanation.

Overall: an entertaining yarn which wouldn’t be out of place by a fireside on a dark, cold night.

8 thoughts on “Review | Once Upon a River by Diane Setterfield”