This story has impressive elements but failed to grab me. 3/5 stars. 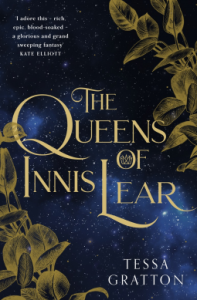 Thank you to HarperCollins UK and NetGalley for giving me an e-copy of this book.

The blurb: The erratic decisions of a prophecy-obsessed king have drained Innis Lear of its wild magic, leaving behind a trail of barren crops and despondent subjects. Enemy nations circle the once-bountiful isle, sensing its growing vulnerability, hungry to control the ideal port for all trade routes.

The king’s three daughters – battle-hungry Gaela, master manipulator Reagan, and restrained, starblessed Elia – know the realm’s only chance of resurrection is to crown a new sovereign, proving a strong hand can resurrect magic and defend itself. But their father will not choose an heir until the longest night of the year, when prophecies align and a poison ritual can be enacted.

Refusing to leave their future in the hands of blind faith, the daughters of Innis Lear prepare for war – but regardless of who wins the crown, the shores of Innis will weep the blood of a house divided.

When I saw the description of this book on NetGalley, it sounded like everything I could possibly want in a book. A fantasy retelling of King Lear which refocusses the story to follow Lear’s daughters? Yes, please!

(Side note: you may have noticed that everything I’m reading lately has a Shakespeare connection – this wasn’t a conscious move on my part but clearly shows my preferences!)

I’m sad to report that despite my high hopes, The Queens of Innis Lear failed to grab me. I persevered and finished the book, hoping that at any moment I would be hooked… but it didn’t happen.

This is a shame because The Queens of Innis Lear has a lot going for it. The descriptions are wonderful, and are particularly impressive when describing the forested areas of the island and the characters’ use of magic.

The depth of character exploration, particularly that given to the female characters is brilliant. None of the women can be easily pigeon-holed and have rich personalities and motivations. While with King Lear it’s easy to dismiss Reagan and Goneril as “evil” or “unnatural” and Cordelia as sickly sweet, the sisters here are all sympathetic in their own ways as even if you don’t agree with their actions, you understand them. The writer also juggles multiple viewpoints well and lots of flashbacks without it becoming confusing or losing the reader.

How the Shakespearean Lear story is used is interesting. Many elements of the play are followed, but Gratton isn’t afraid to make radical departures from Shakespeare’s story, so there’s no need to know anything about King Lear to read and appreciate this book.

If I had to pinpoint the biggest issue which impeded my enjoyment of the story, it would be the amount of thinking. There are entire chapters in which a character stands or sits and thinks. Now, while I apreciate that internal character development can be dynamic and interesting, I would prefer them to be thinking while doing something to move the action forward in some way. Or thinking, then doing something, rather than just mulling things over in solitude. Also, while the flashbacks are well-handled, I wasn’t sure all of them were necessary as, once again, they do nothing to move the present action forward. To give you an idea of the sometimes ponderous pace of this story, we don’t get to the important scene where Lear wants to divide his kingdom between his daughters until just over 20% into the book and this book has over 550 pages.

Also, while the writing is often beautifully lyrical and dreamily poetic this does little to keep up the pace of the narrative or create drama. I felt the story dragged and I found myself not much caring what happened. So while the characterisation is rich, I didn’t find it engaging.

Overall: The Queens of Innis Lear is an interesting retelling with great elements and beautiful writing, but you have to be prepared for its ponderous pace.