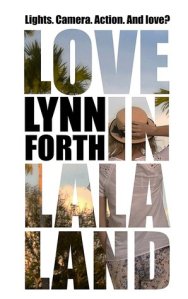 The blurb: Excited to be in glitzy, glamorous Hollywood, English author, Jane Jones, is thrilled by the prospect of seeing a scene from her novel being filmed. And not just any scene. It’s a bedroom one, starring screen heartthrob, Scott Flynn.

Too bad she is accompanied by the cynical Jack Clancy, the screenwriter who has – in her opinion – ruined her story, and seems totally unrepentant.

Dazzled by Scott’s film-star presence, Jane swoons at his feet. At least, that’s according to Scott, who immediately comes to her rescue. And so does Jack.

But do they both have ulterior motives? Is Jane a mere pawn in a game between two fierce rivals?

In the bubble of La La Land’s glittering parties, hovering paparazzi, and powerful movie tycoons, Jane begins to feel adrift. She must quickly learn who can be trusted…and who can’t.

From the title, readers of Love in La La Land will probably be hoping for a tale with plenty of glitz and glamour, oodles of drama, attractive people and beautiful locations… and they won’t be disappointed! This story is a getaway, a rare chance for us “normals” to mingle with the rich and famous, just as it is for the female main character, Jane, who is an earthy Yorkshire lass out of her element in the luxurious but shark-infested waters of Hollywood.

Speaking of the sharks, this story does have plenty of shadier elements to balance the bright lights. Most relevantly, in the wake of #MeToo and #TimesUp, the narrative touches on the seedier side of the movie industry, with elements which feel frighteningly realistic and topical.

The story alternates between Jane and Jack’s viewpoints, giving us insight into their developing feelings as the initial grumpy friction between them turns into something more significant. While the heroine thinks of herself as a quintessential “Plain Jane”, this isn’t a typical Cinderella or ugly duckling story. Her integrity remains laudably unassailable and she is ultimately more concerned with her family and staying true to herself than her feelings for the hero, something which is refreshing and great to see in a whirlwind romance story.

Overall: fun escapism for readers who’d enjoy an insiders view of Tinseltown and some time with a gorgeous hero!