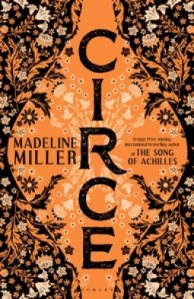 Thank you to Bloomsbury Publishing and NetGalley for providing me with an e-copy of this book.

When I was born, the name for what I was did not exist.

Circe is the daughter of Helios, the sun god, and Perse, a beautiful naiad. Yet from the moment of her birth, she is an outsider in her father’s halls, where the laughter of gossiping gods resounds. Named after a hawk for her yellow eyes and strange voice, she is mocked by her siblings – until her beloved brother Aeëtes is born.

Yet after her sister Pasiphae marries King Midas of Crete, Aeëtes is whisked away to rule his own island. More isolated than ever, Circe, who has never been divine enough for her family, becomes increasingly drawn to mortals – and when she meets Glaucus, a handsome young fisherman, she is captivated. Yet gods mingle with humans, and meddle with fate, at their peril.

In Circe, Madeline Miller breathes life once more into the ancient world, with the story of an outcast who overcomes scorn and banishment to transform herself into a formidable witch. Unfolding on Circe’s wild, abundant island of Aiaia, where the hillsides are aromatic with herbs, this is a magical, intoxicating epic of family rivalry, power struggles, love and loss – and a celebration of female strength in a man’s world.

I give very few books 5 stars. For me, a 4-star book is very very good, but a 5-star book has an indescribable something extra and I want to rave about it to everyone.

Back in 2016, Miller’s previous book, The Song of Achilles, was one of 3 books I gave a top rating. So you could say I was the ideal customer for this book. But I also went in with very high expectations which could easily have been disappointed. So I’m thrilled to say that Miller has done it again: Circe is sublime.

The world Miller creates is so captivating if I’d had the chance I’d have read Circe straight through without taking my eyes from the page. I suspect this is largely due to the wonderful first-person voice of Circe. Her tone is clear and direct but also contains a convincing tint of other-worldiness appropriate to a goddess, although her story is more human than you might imagine.

Inspired as it is by The Odyssey, this story picks up on many well-known myths, recasting them in the light of Circe’s experience including the origins of the monster Scylla and the Minotaur. The only thing I could honestly remember about Circe from reading The Odyssey (many, many years ago!) was that she turned Odysseus’ sailors into pigs – well that certainly gets covered in this version of events and in such a way that Circe has your sympathy!

The imagination at work in Circe is staggering: not only in how Miller incorporates elements from The Odyssey and other versions of various myths into her story, but also in her descriptions of the mortal and immortal worlds. While the island of Aiaia is technically her prison, the place is bursting with life, in stark contrast to the dark stillness of Circe father’s palace where her story begins.

As you’d expect from a book partly based on The Odyssey, the pages are teeming with interesting characters both divine – including Athena, Helios and Hermes – and mortal, including Daedalus and, of course, Odysseus himself. However, while Odysseus is a highly influential figure in this story, the man is only a small part of our heroine’s very long life, and Miller’s Circe steps beyond the wanderer’s story to deliver a full narrative of her own. One which doesn’t shy away from some of the grimmer details of the encounters of gods and men, such as the Trojan War, and the story of Medea and Jason.

Overall: more wonderful word alchemy from Madeline Miller. If you enjoyed The Song of Achilles, put Circe at the top of your to-read list.