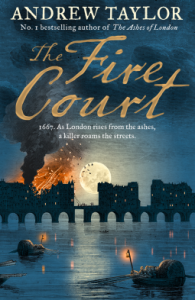 Thank you to HarperCollins UK and NetGalley for providing me with an e-copy of this book.

Somewhere in the soot-stained ruins of Restoration London, a killer has gone to ground…

The Great Fire has ravaged London, wreaking destruction and devastation wherever its flames spread. Now, guided by the incorruptible Fire Court, the city is slowly rebuilding, but times are volatile and danger is only ever a heartbeat away.

James Marwood, son of a traitor, is thrust into this treacherous environment when his ailing father claims to have stumbled upon a murdered woman in the very place where the Fire Court sits. Then his father is run down and killed. Accident? Or another murder…?

Determined to uncover the truth, Marwood turns to the one person he can trust – Cat Lovett, the daughter of a despised regicide. Marwood has helped her in the past. Now it’s her turn to help him. But then comes a third death… and Marwood and Cat are forced to confront a vicious and increasingly desperate killer whose actions threaten the future of the city itself.

I read the first installment in this historical mystery series – The Ashes of London – right before moving onto this book. And while I’m sure you could read and enjoy The Fire Court without having to read book 1 – it is a new mystery which introduces a group of new characters – I would recommend seeking out The Ashes of London first. A lot of my enjoyment in reading book 2 came from seeing how established characters and their relationships developed under the pressures of this plot, and in this regard there certainly is a great deal going on. I can only praise the author for giving us high stakes: he isn’t afraid to put his main characters in true peril and let them get hurt. I lost count of the number of times Cat had call to use or threaten to use her knife in self-defence!

The details of London and life in the aftermath of the Great Fire continue to be fascinating. I had a nice chuckle at a reference to the dissolute Earl of Rochester (who wrote some poetry as scandalous as his behaviour) and realised that I did learn something about the period at university after all! I particularly enjoyed the reminder that London Bridge once had buildings on it, similar to the Ponte Vecchio in Florence – a featured which is important to the story’s climatic action.

I would repeat the warning I made in my review of book 1: if you’re looking for a past-faced murder mystery, this isn’t it. To give you an idea: a woman is murdered in chapter 1, but we don’t find out who she is until a third of the way through the book. If you prefer your stories to shift along in higher gear, this probably isn’t the series for you.

While I enjoyed the character development and setting, I wasn’t overwhelmingly intrigued or gripped by the mystery itself which is basically a legal thriller with all the suspicious deaths tracing back to a post-fire property case. Perhaps fans of legal dramas and court-case thrillers should give this a try?

Overall: if you enjoyed book 1 then I recommend you let Taylor take you back to 1667 for some more intrigue in the smoldering ruins of the capital.