Chocolate, vanilla and caramel layer cake. Honestly, one of the nicest things I’ve ever made (I surprised myself!)

This cake came about because I treated myself to four shallow round cake tins… which of course meant I had to make a four-layer cake. That said, you could still follow this recipe using 2, “ordinary” depth (about an inch/2.5 cm) round cake tins and then cut your cakes in half. Here’s a photo of an “ordinary” depth tin (on the left) and one of the shallow tins (on the right):

To make the cakes, I used my usual go-to sponge recipe. It’s the only one I can remember without having to look at a book! I found the caramel buttercream frosting recipe over at Instructables, although when I make it again I’ll add icing sugar for the filling and crumb coat as well, not just the final coat (that will make sense when you get to the decoration section of the method!).

For the caramel buttercream frosting

If you have an electric mixer or electric hand beaters, use them to make your life easier. Beat the butter for 1-2 minutes until it’s smooth. Add the sugar and beat again until you have a fluffy, smooth mixture (another couple of minutes should be long enough). Add the eggs one at a time, beating the mixture between each addition.

Add the flour, baking powder and vanilla essence and stir gently to combine all the ingredients. 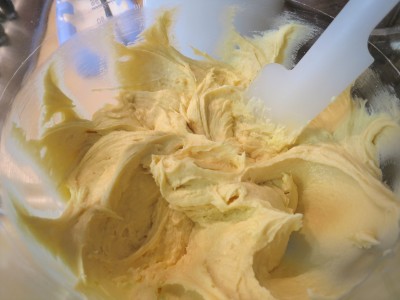 Divide your vanilla sponge mixture into two. You can do this by eye or use scales to get a more exact split. Put half the mixture to one side.

To the other half, add the cocoa powder dissolved in the warm water. Mix through until you have an evenly-coloured chocolate sponge mix. 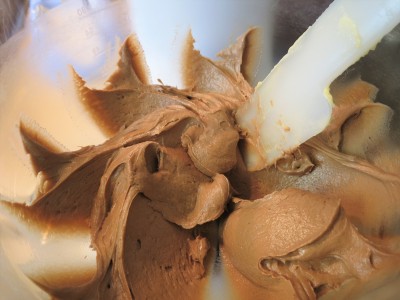 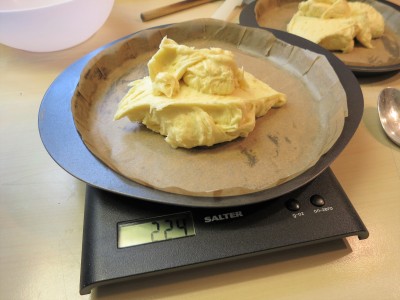 Use a spatula or the back of a spoon to spread the cake mixture evenly in the tins. 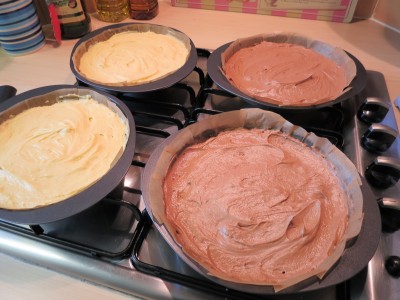 Bake the cakes. If using shallow tins they’ll need somewhere between 15 -20 minutes in the oven. If using deep tins they’ll need 20-25 minutes. Depending on how much space you have in your oven, you may have to cook 2 at a time, or shuffle the tins in the oven half way through the cooking time. When the cakes have risen, start to brown and a knife inserted into them comes out clean you’ll know they’re done.

Leave the cakes in the tins to cool. After about 10 minutes you can turn them out onto a wire rack to finish cooling if you like.

I followed the recipe I found online to make the caramel buttercream by blending together the butter and caramel.

As you can see, this produced a caramel filling which was rather slack and granular in appearance… not what I’d been expecting. Anyway… I used it to assemble the layers of the chocolate, vanilla and caramel cake.

If you’ve made 2 cakes – 1 chocolate, 1 vanilla – it’s at this point you’ll have to cut them in half. It’s best to use a serrated knife if you have one.

I decided to start with a vanilla cake, spread a thin layer of caramel buttercream onto it and then stuck the first of the chocolate cakes on top. Don’t worry if some caramel runs out the sides. Keep going until your used all your layers.

I used half the remaining caramel buttercream to roughly coat the top and sides of the cake (the crumb coat). If you have a turntable put your cake on here while you’re using the knife to apply and smooth the caramel buttercream – it will make it a little easier.

I put the cake in the fridge at this point while I tried to “fix” the remaining buttercream. I decided to do what I’d usually do when making buttercream: use icing sugar. I added 3 heaped dessertspoons of icing sugar to the mixture and the result was great – much thicker, lighter in colour and smoother. Sorry that’s not very helpful if you’re trying to recreate the mixture. If I were making it again, I’d use the same amount of butter, caramel and 450 g of sifted icing sugar to start. Then I’d add more icing sugar as necessary until I got a caramel buttercream with a consistency I was happy with. If you experiment with it, let me know how it goes!

I took the cake out of the fridge and used the remaining caramel buttercream (now with icing sugar) to put the final coat on the cake. I then used some chocolate caramel buttons for final decoration.

The real treat comes when you slice the cake and reveal the lovely layers inside!

Store the cake in an airtight container in a cool place. If you’re lucky enough to be making this in warm weather, it’s best to keep the cake in the fridge, just remember to take it out a short while before you want to serve so it has time to reach room temperature.

Chocolate, vanilla and caramel layer cake: it slices beautifully and is truly delicious.

If you’re looking for other layer cake recipes, you could try: