Excellent sci-fi for readers looking for characters to love. 4.5/5. 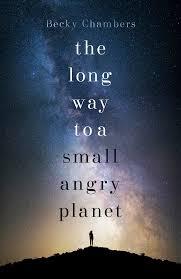 The blurb: Somewhere within our crowded sky, a crew of wormhole builders hops from planet to planet, on their way to the job of a lifetime. To the galaxy at large, humanity is a minor species, and one patched-up construction vessel is a mere speck on the starchart. This is an everyday sort of ship, just trying to get from here to there.

But all voyages leave their mark, and even the most ordinary of people have stories worth telling. A young Martian woman, hoping the vastness of space will put some distance between herself and the life she‘s left behind. An alien pilot, navigating life without her own kind. A pacifist captain, awaiting the return of a loved one at war.

Set against a backdrop of curious cultures and distant worlds, this episodic tale weaves together the adventures of nine eclectic characters, each on a journey of their own.

This has been sitting on my TBR for quite a while and I’m delighted I finally managed to get the chance to read it (thank you to my local library). I’ve been experiencing a bit of a reading slump recently, but this book was terrific and I looked forward to every second I had the opportunity to pick it up.

I’ve read quite a lot of fantasy and sci-fi, and while the various series I’ve read have usually impressed me, they also often leave me feeling slightly dissatisfied. In these cases the author had obviously put an incredible amount of work into world-building, working out their tech/magic systems etc. but the characters left me slightly cold. Becky Chambers seems to have approached her novel the other way round. In the crew of the Wayfarer and their friends she has created a cast of spectacularly diverse, likeable, interesting, and irritating characters who all jump off the page and quickly have you rooting for them. Around them she has built a complex universe of various alien civilizations, but for me that all remained window-dressing to what was essentially 400 pages of reading about people I liked/found interesting interacting in all kinds of entertaining ways.

Don’t get me wrong, as in any space voyage a whole bunch of “stuff” happens, things don’t go exactly to plan, and the crew have to face a number of challenges (I’m trying so hard to avoid spoilers!). But honestly I would have read on and continued to enjoy the book if not much had happened and Chambers had given us chapter after chapter of her characters chatting while working.

I’m delighted there’s a sequel for me to track down!

Overall: highly recommended for readers of sci-fi looking for a diverse group of characters in whose company they will enjoy being stuck on a small spaceship for 400 pages.

3 thoughts on “Review | The Long Way to a Small, Angry Planet (Wayfarers 1) by Becky Chambers”