Jammy Shortcake Biscuit Bites – another no-bake tray bake which is super sweet and simple to make. 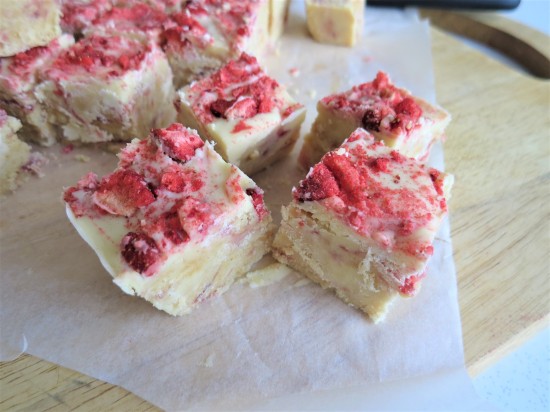 I think I’m on a no-bake roll. Last week it was Mars Bar and Rice Krispies cake bites, this week I’ve been making tray bake using one of my favourite biscuits: Jammy Dodgers.

My mum passed on the original recipe to me from one of Nadiya Hussain’s baking columns in The Times Magazine. I made a couple of changes to the recipe quantities and method, fortunately without any negative repercussions!

A note on Jammy Dodgers

If you’re not familiar with Jammy Dodgers, each biscuit is made up of two circles of shortbread, wedged together with a sticky layer of strawberry jam. The original biscuit is made here in the UK by Burtons, but a lot of supermarkets make their own cheaper versions. I used Aldi’s own version of the classic biscuit, which you can see in the picture below.

Grease and line a brownie tin with baking paper. The tin I used is 7-inch (18.5 cm) square. The original recipe calls for a 22cm-square tin. Anything around this sort of size will work just fine. The bigger the tin, the thinner your final Jammy Shortcake Biscuit Bites will be.

Roughly chop the jammy shortcake biscuits. Cutting each biscuit into about 9 pieces is enough. They tend to crumble anyways so don’t chop too finely or you’ll end up with a pile of biscuit dust! Put the pieces in a bowl and set to one side. 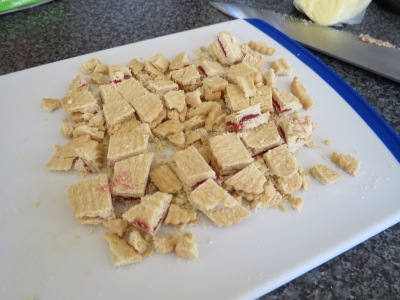 Break 400 g of your white chocolate into small pieces and chop the butter. You can melt these two ingredients together in a pan over a low heat or put them in a heat-proof bowl in the microwave. If using the microwave, start by giving the ingredients a 1-minute burst, then remove the bowl and stir. Follow this with further 30-second bursts, stirring between each until all the butter and chocolate has melted. Add the golden syrup to the melted chocolate and butter and stir through.

Pour the chopped biscuit into the liquid ingredients and mix until thoroughly coated.

Spoon the jammy biscuit and chocolate mixture into your tin and press down with a spatula or the back of a spoon until you have a tightly-packed, even layer.

Leave the mixture to cool until set. This will take at least 30 minutes but you can speed the process up by putting the tin in the fridge.

Break the remaining 150 g of white chocolate into pieces and melt – you can do this in a bowl over a pan of simmering water or by using the microwave again.

Pour the white chocolate over the jammy shortcake biscuit base and spread out using a spatula or knife to form an even layer. Sprinkle over the dehydrated strawberries. I crushed the strawberries slightly as the pieces were rather large, although it did leave me with quite a bit of sweet red dust!

When fully chilled, lift the jammy shortcake cake block out of the tin and onto a chopping board using the baking paper. Cut into as many pieces as you like.

You can store your jammy shortcake biscuit bites in the fridge, but in this case I’d recommend taking the piece(s) you want to serve out of the fridge at least 10 minutes before they are to be eaten or they’ll be like (delicious) rock!

Looking for other tray bake recipes? Try these! 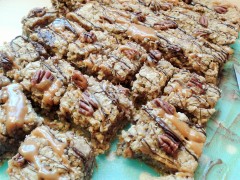 Oat and pecan squares with caramel and chocolate.

You can find even more tray bake recipes on my Recipe Index page.