Cute marshmallow penguins: sweet all year round and not just for Christmas! 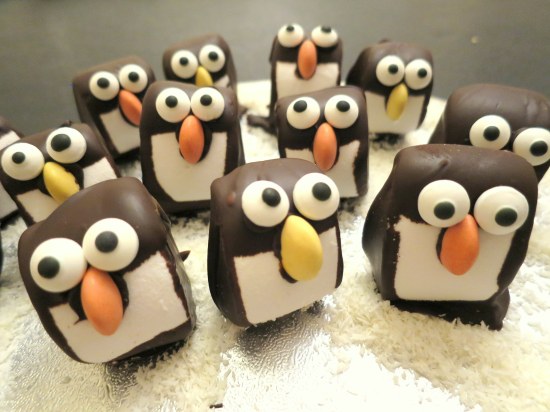 Firstly I have to thank Louise at Pink Pear Bear for featuring this idea on her blog. I saw it on her Facebook feed and knew I had to give it a go. The original recipe and instructions comes from Grace at Eats Amazing. I had to change a couple of points in the instructions because I couldn’t find suitably shaped marshmallows and had to improvise and make do!

Notes on Candy eyes and marshmallows

I ordered my candy eyes online. I got these Wilton candy eyeballs and they’re great.

Grace’s original post features tube-shaped marshmallows with conveniently flat ends, making them ideal to stand up on a flat surface. I couldn’t find these marshmallows anywhere! The closest thing I could find were Haribo Chamallows, a 220 g bag of which are pictured here below (note the excellent price!).

To get the height out of the marshmallow for each penguin, you have to stand them on a curved end (the short end closest to the bottom of the next picture). This meant I had to dip the bottom of the penguins in chocolate too so they would stick to the greaseproof paper and stand up. But more of that later…

Cover a tray or board with greaseproof paper.

Melt your chocolate. You can do this is a Pyrex bowl over a pan of simmering water or, do what I did and use the microwave. Use 30-second bursts, stirring the chocolate between bursts. I’m not a great fan of dark chocolate, so I added a teaspoon of peppermint essence to the chocolate. If you don’t mind how dark you penguins look you could use milk or plain chocolate. I did think that melting a dark chocolate orange could be a good idea!

I would suggest melting your chocolate in a small bowl so you have the depth of liquid chocolate you need to successfully submerge your marshmallows.

I found the best technique for dipping the marshmallows was to put them on a wooden skewer (you could use a toothpick or metal kebab skewer). I insert the skewer roughly a third of the way down the “face” side of the penguin. This is better demonstrated by the next picture:

Don’t worry about the hole. It’ll be hidden by the penguin’s beak.

Dip the head of the penguin into the chocolate first, coating to level with the skewer (you can see this in the next picture). Then coat the back and bottom and finally twist the marshmallow to cover both the sides. It’s important you coat the bottom if you’re using a similar type of marshmallow to me (i.e. one which doesn’t have a flat base).

Put the penguin onto the greaseproof sheet. Don’t worry if the chocolate pools around the base, this will give it a solid foundation when set and look like a little tail and/or feet.

You may find, as I did, that the chocolate base isn’t enough to get your penguins to stand up. When they tried to roll onto their backs, I propped them up using dessert forks, like this:

When you’ve coated all your marshmallows, pop your tray into the fridge (good idea to have cleared a space for this before you start messing about with the chocolate. You’ll need a nice even surface, so clear a shelf if you can). Chill until the chocolate has set. This took about 30 minutes in my fridge.

You should have a little melted chocolate left over. Keep this for sticking on the eyes and beaks.

While you’re waiting for the chocolate coat to set, carefully cut your Smarties or other chocolate beans in half. I found this easier than I thought it would be. Perhaps using the biggest flat-blade knife I have helped spread the pressure and make the Smarties split in two with little problem.

Take your marshmallows out of the fridge. One-by-one, peel them off the greaseproof paper and lay them down. You will need to re-heat your bowl of dark chocolate to get it molten again. I used a knife to spread a small dab of chocolate on the back of each candy eye and the Smartie beak as edible “glue” before positioning them on the marshmallow. Here are 2 pictures showing this work in progress:

When you’ve attached all your eyes and beaks, put the penguins back in the fridge for another 30 minutes.

Store your chocolate marshmallow penguins in an airtight container in a cool place until serving. I kept mine in the fridge.

I just love these! As I was making them and then arranging them for the photos, I couldn’t stop giggling. They all have their own character and I was tempted to start giving them names 🙂 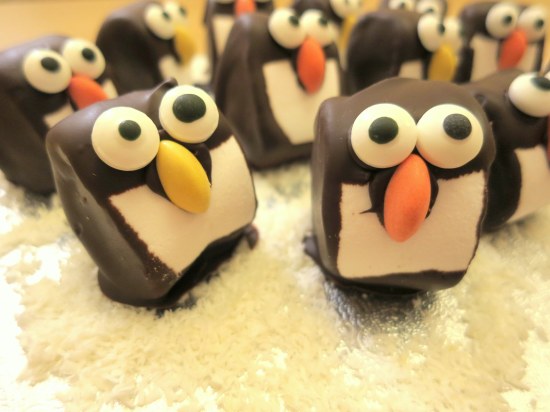 And then I took a picture with a bright overhead light and the result made me laugh so much. This photo looks like either: a) aliens have come to beam up the penguins or b) the penguins are looking up like the aliens in Toy Story and thinking “The Claw!!”

They’re a little fiddly to make, but such fun. Perfect for a festive gathering or a children’s party any time of year!

Phil and his friends would like to wish you all happy holidays! 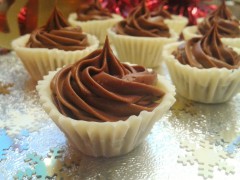 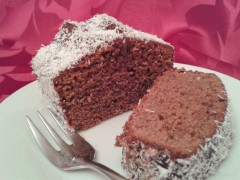