A good detective mystery with supernatural elements. Fans of the Peter Grant series should definitely check this out. 4/5 stars. 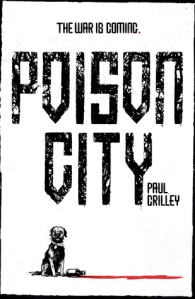 Thank you to Hodder & Stoughton and NetGalley for giving me an e-copy of this book in return for an honest review.

The blurb: The name’s Gideon Tau, but everyone just calls me London. I work for the Delphic Division, the occult investigative unit of the South African Police Service. My life revolves around two things – finding out who killed my daughter and imagining what I’m going to do to the bastard when I catch him.

I have two friends. The first is my boss, Armitage, a fifty-something DCI from Yorkshire who looks more like someone’s mother than a cop. Don’t let that fool you. The second is the dog, my magical spirit guide. He talks, he watches TV all day, and he’s a mean drunk.

Life is pretty routine – I solve crimes, I search for my daughter’s killer. Wash, rinse, repeat. Until the day I’m called out to the murder of a ramanga – a low-key vampire – basically, the tabloid journalist of the vampire world. It looks like an open and shut case. There’s even CCTV footage of the killer.

Except… the face on the CCTV footage? It’s the face of the man who killed my daughter. I’m about to face a tough choice. Catch her killer or save the world? I can’t do both.

It’s not looking good for the world.

This reminded me a lot of the Peter Grant series by Ben Aaronovitch. You’d just need to age Peter 20 years, give him some tragic life experience, transfer him to South Africa and make him work for a larger law enforcement unit with a cool secret base of operations and far more resources… Well, anyway… you’ll just have to trust me that there truly are similarities! 🙂

However, unlike the Peter Grant series, the narrative tone in Poison City reminded me of the voice-overs you get in film noir. You know the sort of thing: think Jack Nicholson’s narration in China Town, the deadpan voice of the tired, cynical investigator. But don’t worry, lots of colour is provided by Gideon’s alcoholic talking dog, who is one of the highlights of the book and if the author goes on to write future installments (I hope so), should get to feature far more.

The author isn’t afraid to describe the nastier aspects of Gideon’s job, giving us crime scenes dripping in blood and fight sequences in which people get hurt. This certainly isn’t a story for the squeamish. On the bright side, at least this means we know there are real stakes. There’s nothing worse than books featuring the supernatural in which all the characters are supposedly able to get hurt but are actually invulnerable. How are we supposed to care if the worst that can happen to them is a mild headache or the odd bruise?

Poison City is a good mixture of the supernatural and police procedural. The only things I wasn’t too fond of were the narrator’s Hobbesian ponderings on the essentially corrupt nature of mankind and the difference between law and justice. These passages cropped up too often and went on too long when they were essentially saying the same thing each time. Oh, and we need more of the dog, but I think I already said that 😉

Without spoiling anything, I’d also suggest that firm believers in God (the God of the Judeo-Christian tradition to be precise) would best avoid this one because they would possibly be offended by how their deity and other elements of their religions are treated/talked about by the characters. Of course I’m sure there are also believers who wouldn’t care at all, but I thought it was worth mentioning.

Overall: a good police procedural with supernatural elements, real menace and a grouchy talking dog. What more could you want?!