Yes! I finally made bread. And it turned out OK! 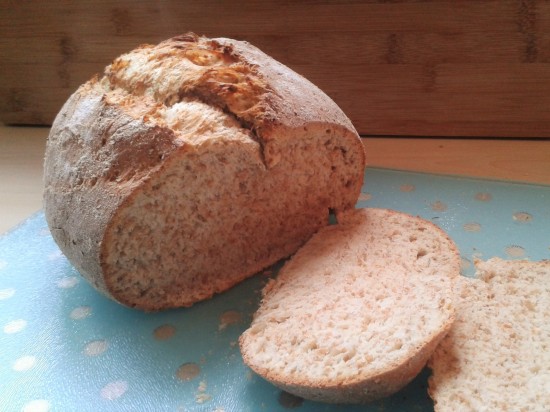 So it only took me nine months after swearing that I would, but I finally made bread! I went for one of the easiest recipes I could find in The Big Book of Bread: the recipe for a split tin loaf.

Apologies for the photos. The bread is the same colour as my kitchen counters and the light was really weird the day I made these!

Grease two 900 g (2 lb) loan tins and put to one side. I didn’t have two loaf tins, so I just shaped my dough into two rough loaf shapes and baked them on greased baking trays.

Sift the white flour into a large bowl, add the wholemeal flour, salt, sugar and yeast. Make a well in the centre of the dry ingredients, add the egg and milk, then mix to form a soft dough.

I did the mixing phase in my mixer using the dough hook attachment and the dough looked like this:

Turn the dough out onto a lightly floured surface and knead until smooth and elastic. I kneaded the dough for about 10 minutes. You can also let your mixer do this stage too if you have a dough hook.

If you’re using loaf tins, divide your dough in half and pat each portion into a rectangle shape the length of the tins. Roll up each portion of dough from one short end. Place into the loaf tins, seams-sides down and tuck the ends under. Cover and leave to rise in a warm place until doubled in size.

If you’re using baking trays rather than loaf tins, shape your dough into a ball and put into a large, lightly oiled bowl and cover with cling film.

I left the dough to prove for 2 hours (you’ll need a minimum of an hour). If you’re lucky enough to have a proving drawer or space in your airing cupboard, that’ll help the dough rise more quickly. After 2 hours, the dough had certainly doubled in size!

Pre-heat the oven to 230 degrees C (210 fan) / Gas Mark 8 / 450 degrees F. If you’ve used loaf tins, this is when you can cut a deep slash along the centre of each loaf, dust them with flour and put them into the oven. However… as I still had to shape my dough before putting it on the baking trays, I decided to put it back on my floured board and gave it another knead. I think I’ve been influenced by Bake Off and all the contestants saying how important it is to “knock back” the dough! This time I only kneaded for a few minutes. I then cut the dough in half and shaped it into two rough loaf shapes, then I did the aforementioned cutting and dusting.

Bake the loaves for 15 minutes, then turn the oven down to 200 degrees C (180 fan) / Gas Mark 6 / 400 degrees F and bake for another 15-20 minutes or until the bread has risen, lightly browned and sounds hollow when tapped underneath. I found I had to turn the oven down after 10 minutes because the loaves were starting to go a little too brown on top. Here they are just out of the oven: 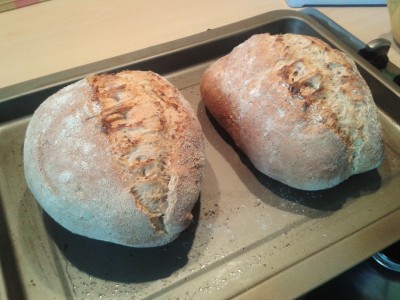 Cool on a wire rack. Slice and enjoy! 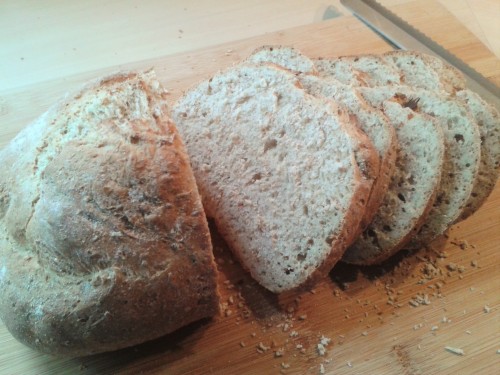 And, in the interests of balance, here’s a gluten free recipe! 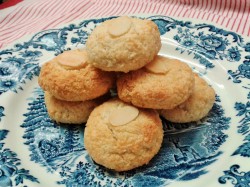