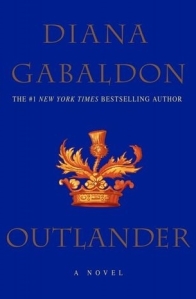 The blurb: The year is 1945. Claire Randall, a former combat nurse, is just back from the war and reunited with her husband on a second honeymoon when she walks through a standing stone in one of the ancient circles that dot the British Isles. Suddenly she is a Sassenach—an “outlander”—in a Scotland torn by war and raiding border clans in the year of Our Lord…1743.

Hurled back in time by forces she cannot understand, Claire is catapulted into the intrigues of lairds and spies that may threaten her life, and shatter her heart. For here James Fraser, a gallant young Scots warrior, shows her a love so absolute that Claire becomes a woman torn between fidelity and desire—and between two vastly different men in two irreconcilable lives.

Sorry, but this is one of those reviews where I’m going to have to resort to bulletpoints…

On the one hand:

I feel I need to give credit for all these things and say I can understand why so many readers love this book. However, the things that I can’t like about this book are serious and so I can’t bring myself to give it a 3 star rating. Three stars means “ok” and I can’t say that of some of the things depicted in this book.

The things which are very much not “ok” began to appear in Part 3. Without wishing to spoil things, let’s just say that events started to remind me of The Taming of the Shrew and, historical accuracy be damned, as a 21st century reader I can’t shake these things off or forgive a character I’m supposed to love for their deplorable actions. Which he admits he enjoyed, by the way. And I couldn’t pardon the other key character for forgiving their abuser and accepting that they “deserved” the abuse. No. Sorry. Just no.

And as if romanticised spousal abuse weren’t bad enough, there’s the homophobia. All instances of homosexuality in this book were linked to rape, the threat of rape and/or sadistic torture.

So, what I’m trying to say is: this book has its good points. And until the events of Part, 3 I was enjoying the adventure fairly untroubled. But once events started to upset me, I became less inclined to overlook the book’s other faults, including the aspects which made me deeply uneasy and/or queasy.

On the other hand, I’m a compulsive completist and, as I believe in giving an author a second chance, I will read the next book at some point. After a decent break.

Overall: if you don’t notice the things which annoyed me (or think I’m just taking it all too seriously), I’m sure you’ll enjoy the adventure and romance in this book without having any of my issues. But I did notice them and it ruined my enjoyment of the otherwise good aspects of the book 😦