A few smiles but not enough laughs. 3/5 stars. 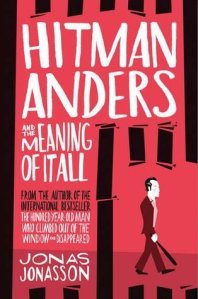 Thank you to HarperCollins and NetGalley for giving me an e-copy of this book in return for an honest review.

The blurb: Hitman Anders is fresh out of prison and trying to keep his head down when he meets a female Protestant vicar (who happens to be an atheist), and a receptionist at a 1-star hotel (who happens to be currently homeless). Together they cook up an idea for a very unusual business that’s going to make them all a fortune – but then all of a sudden, and to everyone’s surprise, Anders finds Jesus . . .

Anders’ sudden interest in religion might be good for his soul but it’s not good for business, and the vicar and the receptionist have to find a new plan, quick.

As wildly funny and unexpected as The Hundred-Year-Old Man Who Climbed Out of the Window and Disappeared and The Girl Who Saved the King of Sweden, this is a madcap, feel-good adventure about belief, the media – and the fact that it’s never too late to start again.

I read The Hundred-Year-Old Man Who Climbed Out of the Window and Disappeared a few years ago – in Spanish I might add. It was one of my book club choices back in Spain and I enjoyed it more than everyone else who just thought it was odd. I, on the other hand, liked how it played with twentieth century history, and the present-day section contained some decent laughs. So I was looking forward to reading Hitman Anders.

This book is written in the detached ironic tone which will be familiar to readers of The 100-Yr-Old Man. However, sadly Hitman Anders it not as amusing as Jonasson’s international best-seller.

It starts off well. I liked the set-up and the unusual combination of quirky characters. Events were rolling along nicely until about half way through when the plot began to run in circles. In an ironic aside in Chapter 57, the narrator acknowledges this lack of plot progression when he comments, “In some sense, one could say that they [the two main characters] were back in the vicinity of Chapter 16 of this story,” but making a joke about this absence of forward progression doesn’t make it ok. This dearth of story development, coupled with characters who – while initially pleasingly odd – aren’t particularly loveable or even interesting, meant the story failed to grip me.

I was expecting a farce and so didn’t have any issues with the ludicrousness of events, but I can imagine some readers may find the continued and escalating daftness annoying. One final warning should go to Christians who get upset by anyone poking gentle fun at their religion: steer well clear of this and The 100-Yr-Old-Man.

Overall: diverting enough if you want a well-written farce to dip in and out of and don’t mind the lack of a strong linear plot.