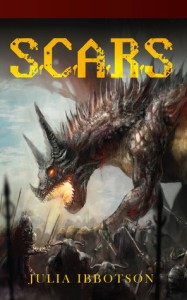 Thank you to Julia Ibbotson for asking me if I’d like to review S.C.A.R.S. and sending me a copy.

The blurb: Gavin is an ordinary boy with problems like everyone else, when he finds himself in an extraordinary situation and facing the fight of his life. People are calling him Gawain and sending him on a medieval quest. How has he found himself on a horse when he has never ridden one before? How come he has a sword in his hand and terrifying creatures bearing down upon him? He seems to have slipped through into another universe. But can he win the battle of Good against Evil, and can he save the land of Unor  ̶  and more importantly, can he save himself?

As ever, clicking on the cover image will take you to the book’s Goodreads page.

I studied Old English in my first year of university. You may think I mean Chaucer, but he wrote in Middle English, a language which resembles the language we use today. Old English, a.k.a. Anglo Saxon, looks like a cross between German and Norwegian. We had to translate large chunks of OE texts, which wasn’t the most fun I’ve ever had. However, while the language itself may have been the bane of my life, the stories were fantastic. Stories like Beowulf and Sir Gawain and the Green Knight. Stories full of warriors, kings, treasure, quests, monsters, and grand themes like kinship, virtue and honour. And it’s these brilliant stories which are the inspiration for S.C.A.R.S.

Gavin is an ordinary eleven/twelve year old (his age isn’t specified, but he’s in his first year of high school), apart from when he goes to sleep. In his extremely vivid dreams he becomes Gawain, a brave knight driven to pursue a quest to save the land of Unor from an all-encompassing evil.

The “dream” sections of the book are dramatic and evocative. The quest sets off at a cracking pace as Gawain is sent headlong into a vicious battle against some nasty dragon-like creatures, and continues in this vein for the rest of the book with plenty of threat and peril. This facet of the story will also be familiar to anyone who enjoys the world of The Lord of the Rings – after all, Tolkein was a professor of Anglo Saxon. I also imagine this will be the favourite part of the book of the middle grade target audience.

Maybe it’s because I’m a bit (*ahem*) older, but I think I preferred the “waking” sections of the plot. In the present-day setting, we see Gavin struggle with bullies, unsympathetic teachers and his stressed-out mum and slowly notice the overlap between his waking and dreaming experiences. I’m also a mum now, and couldn’t help but worry if he was going to be ok!

Overall: if I were eleven, I think I’d have just found a new favourite book. A fun quest for younger readers and the young at heart.

You can find your own copy of S.C.A.R.S. on Amazon.