These raspberry ripple cupcakes are mini versions of one of the nicest sandwich cakes I’ve ever made. This way it’s easier to store and share the deliciousness 🙂 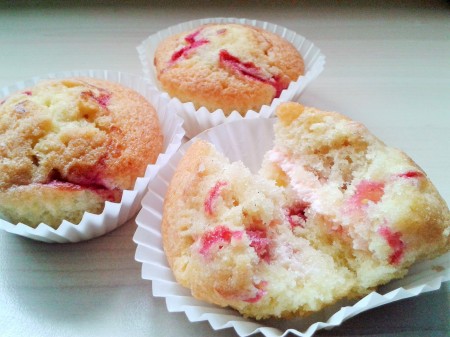 Last year, as part of my mission to make all the cakes which feature in my first novel, Art and Soul, I made a large raspberry ripple sponge cake filled with raspberry flavoured buttercream. I surprised myself with just how delicious is was and I’ve made it several times since. This week I didn’t have enough raspberries to make a large cake, so decided to make some cupcakes instead.

For the filling I made raspberry buttercream by creaming together 75 g (2.5 oz) of butter/marg and 150g (5 oz) icing sugar, then adding the tablespoon of raspberry purée I’d reserved. This should make your buttercream a nice, light pink. If it also makes it a bit too thin, add some more icing sugar to thicken it up.

Now to put the filling into each of the cupcakes. This is when having used 2 paper cases for each cake comes becomes important.

Take each cupcake out of the cases. The outside case will be clean – put it to one side. Throw the “dirty” one away. Cut the cupcake in half horizontally and pipe some raspberry flavoured buttercream between the layers. You can either pipe a little so that when you put the layers back together you can barely see the buttercream (as in the first strip of pictures below), or you can pipe more so there’s a clear layer of buttercream (as in the second strip of pictures below).

Now you can pop the filled raspberry ripple cupcakes back into the clean second paper cases. 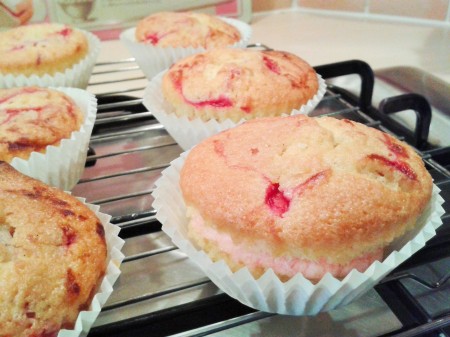 Or you can serve them without their cases. Either way, they’re delicious! 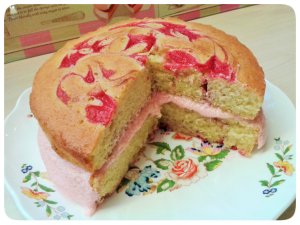 You can find the original (and much larger!) version of this raspberry ripple sandwich cake recipe here.