A light-hearted story with some serious messages. Ideal for children and adults to share. 4/5 stars. 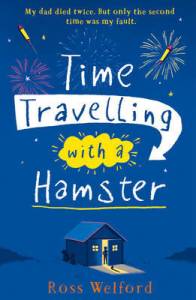 The first time had nothing to do with me. The second time definitely did, but I would never even have been there if it hadn’t been for his ‘time machine’…”

When Al Chaudhury discovers his late dad’s time machine, he finds that going back to the 1980s requires daring and imagination. It also requires lies, theft, burglary, and setting his school on fire. All without losing his pet hamster, Alan Shearer…

As ever, clicking on the cover image will take you to the book’s Goodreads page.

First, to deal with your questions:

Many kids movies, particularly animated films, include jokes and references to appeal to parents and carers. These jokes usually sail over the heads of young viewers but keep the adults chuckling. In this way, while the film has a core children’s audience, there’s something in it for adults too.

I thought about this a few times while reading Time Travelling with a Hamster. I have no problem reading books which are written for children. I’ve always thought that a good book is a good book and can be enjoyed by a reader no matter how old they are. That said, in the case of Time Travelling with a Hamster, I’d say the book’s core audience is definitely 8-12 year olds. Al, the main character and first person narrator, is twelve, and overall I felt the book read a little “young” for adults. However, the plot revolves around child-parent and child-grandparent relationships meaning that there is also a great deal for adult readers to appreciate and enjoy. Also, the action in the past takes place in 1984 with lots of little details which made me – a child of the 80s – laugh. I’m not sure many ten year olds would appreciate these period references.

It was interesting to read this book so soon after The Girl from Everywhere. Heilig’s book gets around the difficulties of explaining time travel by being as vague as possible about how it works. Time Travelling with a Hamster takes the opposite tack: it dazzles us with Al’s dad’s knowledge of quantum physics and Einstein’s theories in particular. It tries to explain time travel to you in simple terms… until you realize that you have little hope of understanding it all and happily give up worrying about it. Besides, I was too busy worrying about whether Al was going to get stuck in 1984 to really care how the laptop+tin tub = time machine set-up worked.

I don’t usually quote the books I read, but this was one of my favourite passages (from Chapter 8):

“Can you see that star there, the brightest one?” He was pointing not straight up, but more towards the horizon where a bright, bluish star was flickering. “That’s Sirius,” he said, “nicknamed the Dog Star. It’s a huge sun, bigger than our sun, and it’s 81 trillion kilometres away.”

Now, I don’t know about you but when someone starts talking about numbers like trillions, I kind of glaze over. I can’t even imagine what 81 trillion kilometres is like. As if reading my mind, Dad went on: “That’s eighty-one thousand billion.”

I wasn’t any the wiser.

“Or in other words  – nearly a million times greater than the distance between our earth and our sun.”

OK – that’s a little bit easier to imagine. Just a bit. I gave Dad’s hand a squeeze to let him know I was sort of following him.

“So, Al: the light from Sirius has taken nearly nine years to travel to earth. Nine years from leaving Sirius to hitting your eyeballs. In other words, you are looking at something that happened nine years ago.”

The lesson being that star-gazing is time travel. Cool 🙂

The story is great fun and includes solid moral messages such as the importance of standing up for yourself and your friends, being kind to animals, and cherishing your family.

Overall: this is a sweet children’s story which would be ideal for an adult and child to read together. And it may even have taught me a few things about quantum physics! 🙂