A compelling study of what the mind and body will do to survive. 3.5/5 stars. 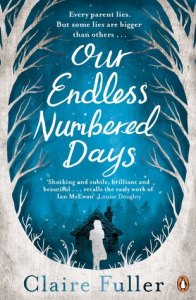 I was given a copy of this book by the publisher in return for an honest review.

The blurb (click on the cover image above to go to the book’s Goodreads page):

1976: Peggy Hillcoat is eight. She spends her summer camping with her father, playing her beloved record of The Railway Children and listening to her mother’s grand piano, but her pretty life is about to change.

Her survivalist father, who has been stockpiling provisions for the end which is surely coming soon, takes her from London to a cabin in a remote European forest. There he tells Peggy the rest of the world has disappeared. And so her life is reduced to a piano which makes music but no sound, a forest where all that grows is a means of survival. And a tiny wooden hut that is Everything.

Peggy is not seen again for another nine years.

1985: Peggy has returned to the family home. But what happened to her in the forest? And why has she come back now?

This review will be spoiler-free.

As you can see from the blurb, the story of Our Endless Numbered Days switches between scenes pre-1985 (which cover Peggy’s early childhood, her trip to the forest and time there) and late 1985 when she is back in her family home in London. The main advantage of this time hopping: I was never concerned that the main character and first-person narrator would die during the harder moments of her time in the woods (and there are some incredibly difficult moments). This meant I could relax and give my undivided attention to the descriptions of Peggy’s experiences. And these descriptions are fantastic. The narrative voice is compelling, even though it’s slightly detached and numb, which you would expect from someone who had survived what she has. Most of the time you feel right there in the forest with her. The experience is so immersive that being transported back to 1985 London is at times an irritating jolt and at others a blessed relief.

The pacing until right at the end (I’ll come to that in a moment) was also excellent. The story is quietly gripping, moves along at a good rate and I didn’t feel bored for a moment.

As I came towards the end of the book, I was fairly sure I was going to give the book four stars. But then the reveals happened. My issue with them wasn’t that they didn’t surprise me; I’d seen them coming for a good while, but that was ok because the hints were given with admirable subtlety. My gripe was that the reveals were all delivered only three pages before “The End”. I felt slightly cheated and thought a few more pages or a short epilogue would have rounded off my experience of Our Endless Numbered Days far better.

Would I recommend this book? Yes, absolutely. Just don’t expect a gripping thriller, whodunnit, or a detailed postmortem of the events in the forest.

Overall: a compelling study of what the mind and body will do to survive rather than a thriller. Come to this expecting an impressively immersive wilderness experience rather than a mystery with a stunning twist.

Thank you to Penguin Books (UK) for giving me an e-copy of the book via NetGalley. The paperback was released on 31/12/15 and, in a superficial aside, I’d like to say that the cover is just wonderful.

Have you read Our Endless Numbered Days? What did you think? Were you knocked sideways by the reveal? Let me know in the comments below 🙂

12 thoughts on “Review | Our Endless Numbered Days by Claire Fuller”