A wonderful setting and a complex moral dilemma make this a good (if not all that gripping) read. 3.5/5 stars. 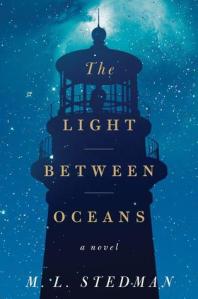 The blurb: After four harrowing years on the Western Front, Tom Sherbourne returns to Australia and takes a job as the lighthouse keeper on Janus Rock, nearly half a day’s journey from the coast. To this isolated island, where the supply boat comes once a season and shore leaves are granted every other year at best, Tom brings a young, bold, and loving wife, Isabel. Years later, after two miscarriages and one stillbirth, the grieving Isabel hears a baby’s cries on the wind. A boat has washed up onshore carrying a dead man and a living baby.

Tom, whose records as a lighthouse keeper are meticulous and whose moral principles have withstood a horrific war, wants to report the man and infant immediately. But Isabel has taken the tiny baby to her breast. Against Tom’s judgment, they claim her as their own and name her Lucy. When she is two, Tom and Isabel return to the mainland and are reminded that there are other people in the world. Their choice has devastated one of them.

M. L. Stedman’s mesmerizing, beautifully written novel seduces us into accommodating Isabel’s decision to keep this “gift from God.” And we are swept into a story about extraordinarily compelling characters seeking to find their North Star in a world where there is no right answer, where justice for one person is another’s tragic loss.

Firstly, I’m posting this earlier than usual because I guess the later I leave it, the more of you will be far too busy with festive preparations to read anything!

I’ll try and avoid spoilers, but anything mentioned in the blurb above is fair game.

The story’s setting and descriptions are the best thing about this book. The author has clearly done a lot of research into the young Australians who fought in WWI, the national lighthouse service and lighthouses themselves. I particularly enjoyed the little details about the lighthouse and lamp; the descriptions were often beautiful and always evocative. That said, there were a few passages which I found slightly over-written and which gave me simile whiplash (when you haven’t quite recovered from the impact of one simile and the author hits you with another).

I like Tom, the main male character, and baby/toddler Lucy. I found them the most sympathetic and I cared about what happened to them. Unfortunately, I can’t say the same about the main female characters: Isabel and Hannah. They were all emotion and nerves, which meant their actions and reactions were often extreme and knee-jerk. This also meant the drama slides into melodrama in places, particularly in Part 3. This final act is also the most repetitive and I started to skim-read sections describing the characters’ feelings and thoughts – which they’d had a few times before – just to find out what would happen.

I think I would have found this book more enjoyable if I had been reading it specifically to discuss with others afterwards. The moral dilemmas would give a book club a lot to talk about. But, for all the difficult ethical questions the story raises, it wasn’t particularly gripping. Perhaps because as soon as Tom and Isabel decide to adopt the baby you known things can’t work out well and so the rest of the book is like watching a car crash happen in slow motion.

Overall: this is good but don’t mistake it for a thriller. This is a ponderous, slightly melodramatic reflection on the consequences of making a morally dubious decision.

Have you read The Light Between Oceans? What did you think? Perhaps it was your book club read?

11 thoughts on “Review | The Light Between Oceans by M. L. Stedman”