Why not join in? Just answer the following three questions in a post and then put a link to that post in the Comments over at Taking on a World of Words.

1. What I’m reading at the moment

The Rest of Us Just Live Here by Patrick Ness

Last Sunday I went to a very enjoyable writers/book bloggers meet up in Birmingham organized by Kim from digital publisher Bookouture. Thank you so much to Lindsay at bookboodle for: (a) inviting me and, (b) giving me her lovely copy of The Rest of Us Just Live Here!! SO pleased! Christmas has come early 🙂

So far, this is enjoyable. I think it will continue that way as long as it doesn’t start to take itself too seriously. If it does, Mr Ness and I may finally fall out 😦

The blurb: What if you aren’t the Chosen One? The one who’s supposed to fight the zombies, or the soul-eating ghosts, or whatever the heck this new thing is, with the blue lights and the death?

What if you’re like Mikey? Who just wants to graduate and go to prom and maybe finally work up the courage to ask Henna out before someone goes and blows up the high school. Again.

Because sometimes there are problems bigger than this week’s end of the world, and sometimes you just have to find the extraordinary in your ordinary life. Even if your best friend is worshipped by mountain lions.

2. The last books I read

The Ocean at the End of the Lane by Neil Gaiman

This was very good, but I think I have yet to read Gaiman at his best. I’ll keep trying! Here’s my full review.

The short blurb: A groundbreaking work from a master, The Ocean at the End of the Lane is told with a rare understanding of all that makes us human, and shows the power of stories to reveal and shelter us from the darkness inside and out. It is a stirring, terrifying, and elegiac fable as delicate as a butterfly’s wing and as menacing as a knife in the dark.

The Bones of You by Debbie Howells

This was good. An entertaining, solid read which kept me guessing about “whodunnit” until about 40 pages from the end. Here’s my full review.

What it’s about: A stunning, wonderfully assured psychological thriller that evokes Gillian Flynn and Alice Sebold, The Bones of You revolves around a young girl’s murder and one woman’s obsession with uncovering the secrets in an idyllic English village.

I’m sure you’ll be stunned to see we’re back to YA sci-fi/fantasy… However, before you despair, the library also turned out to have…

The Cuckoo’s Calling by Robert Galbraith (aka J.K. Rowling)

I’d like to read the three books in the Cormoran Strike series. Let’s see how the first one goes!

What it’s about: Detective Cormoran Strike investigates a supermodel’s suicide. After losing his leg to a land mine in Afghanistan, Cormoran Strike is barely scraping by as a private investigator. Strike is down to one client, and creditors are calling. He has also just broken up with his longtime girlfriend and is living in his office.

Then John Bristow walks through his door with an amazing story: His sister, the legendary supermodel Lula Landry, known to her friends as the Cuckoo, famously fell to her death a few months earlier. The police ruled it a suicide, but John refuses to believe that. The case plunges Strike into the world of multimillionaire beauties, rock-star boyfriends, and desperate designers, and it introduces him to every variety of pleasure, enticement, seduction, and delusion known to man.

It could be very interesting to read this as a contrast to The Rest of Us Just Live Here. It  sounds as this might be about the “Indie Kids” who are on the edges of Ness’ story!

What it’s about: Don’t call them heroes. But these six Californian teens have powers that set them apart

Ethan aka Scam has a voice inside him that’ll say whatever people want to hear, whether it’s true or not. Which is handy, except when it isn’t – like when the voice starts gabbing in the middle of a bank robbery. The only people who can help are the other Zeroes, who aren’t exactly best friends these days.

Enter Nate, aka Bellwether, the group’s ‘glorious leader.’ After Scam’s SOS, he pulls the scattered Zeroes back together. But when the rescue blows up in their faces, the Zeroes find themselves propelled into whirlwind encounters with ever more dangerous criminals. At the heart of the chaos they find Kelsie, who can take a crowd in the palm of her hand and tame it or let it loose as she pleases.

The Raven Boys (The Raven Cycle #1) by Maggie Stiefvater

Like Cassandra Clare, Maggic Stiefvater is one of those authors I see a lot of good things about, but have never read. So I hope to correct that, starting with The Raven Boys.

The (short) blurb: From Maggie Stiefvater, the bestselling and acclaimed author of the Shiver trilogy and The Scorpio Races, comes a spellbinding new series where the inevitability of death and the nature of love lead us to a place we’ve never been before.

Have you read/are reading any of these? What are you reading? Let me know! 🙂

You can also find me on Twitter @ClaraVal and on Goodreads. 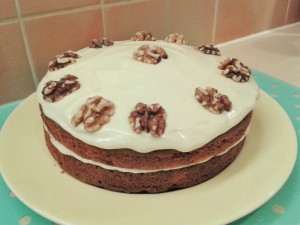 Last week I continued to fulfil my promise to bake all the cakes which feature in my first novel, Art and Soul, by making this delicious carrot cake with cream cheese frosting.