I blazed through Crown of Midnight (4/5 stars) and Heir of Fire (3/5 stars) so fast I decided to review them together. Also this gives me more time to focus on reading Queen of Shadows! 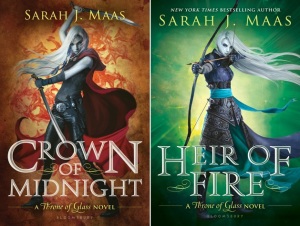 What it’s about: the saga of the teenage assassin, Celaena Sardothian, continues… I won’t say more because inadvertent spoilers would certainly ruin your enjoyment of the series. If you’re interested in knowing more, check out my review of Book 1, Throne of Glass.

Throne of Glass lit a bank of fuses and we get to see the fireworks go off in Crown of Midnight, making it a gripping, extremely entertaining read. However, I did roll my eyes a lot at the supposed “mystery” surrounding Celaena’s origins and who she might be. By the time we get to the final pages and all is revealed, I’d spent practically the whole book cursing the characters for their stupidity, even if that stupidity served the plot.

[SPOILER ALERT] Another thing that gave this installment the edge for me was the “five minutes of happiness” section with Calaena and Chaol, even though I became convinced he was going to get killed off because everything was just too darn marvellous 🙂

Heir of Fire was also good, but not as gripping as Crown of Midnight, mainly because it had to do a lot of work introducing new characters and lining up more fuses. Also, Heir of Fire contains too many echoes of other books and films, which lost it originality points. There’s a lot of The Empire Strikes Back – our heroine spends most of the book in a misty foreign realm being trained by an ancient warrior to harness her magical powers. Also, as we learn more of the sinister King of Adarlan’s plans, the more I think of Sauron and his armies in The Lord of the Rings.

All that said, both these books as extremely entertaining and so easy to read you can zip through them in a day. Things become a little repetitive in places and sometimes you may wonder why all the characters have to talk as if they’re in a smart-ass competition, but overall this is an addictive fantasy series which provides brilliant escapism. Can’t wait to see what happens next!